They are two creations of Haute Joaillerie and Haute Horlogerie respectively, united by the caliber 101.

It is curious that to design these two pieces they used the opposite process to the original.

In traditional watchmaking, you first imagine the case and then you think about the bracelet, here the opposite happened.

To design the watches, we thought about the bracelet and then decide on the cases and movements.

Both bracelets are faithful to the Haute Joaillerie tradition of making the pieces in rose gold.

They are set with diamonds and although they share these similarities, at the same time they are very different from each other.

The February bell is inspired by the flowers of the Valle de Joux when winter ends. Everything about her announces delicacy and femininity.

The Snowdrop wristwatch features a pear diamond circle that surrounds the dial and forms a flower.

The diamond waves are repeated to form the symmetrical petals.

It is a novel design that barely shows the presence of metal and causes a waste of light from any point of view due to the gems.

When looking at the bracelet in profile, it can be seen that the line setting technique was used.

It is held up by two gold rings, each of which is set inlaid with diamonds. 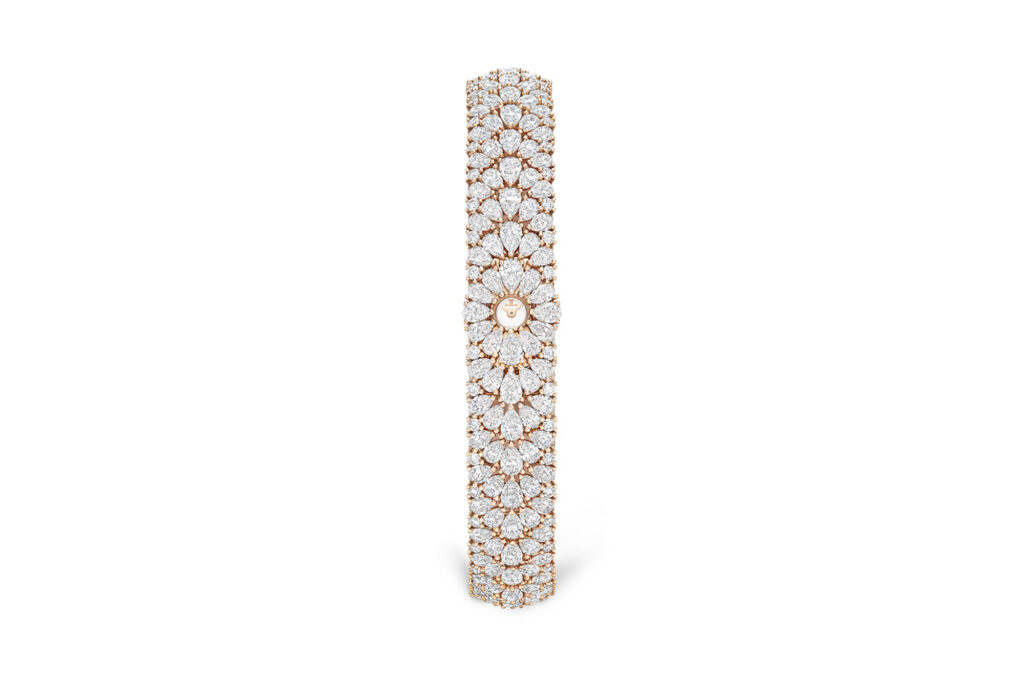 On the other hand we find the Bangle model inspired by Art Deco and with modern elements of the present century.

The bracelet shows a symmetrical and asymmetrical balance, a daring and feminine game.

It has 996 diamonds where the claw and grain settings are combined, 19.7 carats that highlight the curves of the garment, highlight the diamonds and cause a waste of light when looking at it.

It is a model without clasp, you just have to turn the two arms gently to brighten it.

Both watches merge into a common element, the caliber 101, a very small manual-winding caliber that to this day remains the smallest mechanical movement in the world and one of the oldest produced.

It dates from 1929 and was designed and developed for jewelry watches. It is 14mm long and less than 5mm wide, weighing barely one gram.

The mechanism has been part of great houses including Jaeger-LeCoultre and has been used by great women such as Queen Elizabeth II, who wore one at her coronation in 1953, a gift from the President of France.

The Caliber 101 became what Jaeger-LeCoultre was looking for, always in search of new horizons and faced with miniaturization.

With almost 100 years of life, the caliber 101 has received improvements, but in essence it has not changed.

Paris Jewerly
With Paris Jewelry, you can browse all the latest trends in jewelry, The past, present and future of jewelry ...
The fine stones

The History of Audemars Piguet